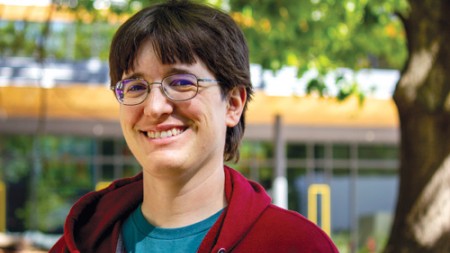 What is your background and areas of interest?

I was the kid who took things apart and was able to (mostly) get them together again. As a teenager I attended Space Academy, which is the teen version of Space Camp, and thought for a long time about becoming an astronaut. It was one of many possible fields of interest. I wasn’t sure what professional area to pursue, and in retrospect I didn’t have a “career plan” so much as a “let’s keep going and see what happens plan.”

I started out as a photojournalism major and ended up as a mechanical engineering major, earning a bachelor of science degree from Rochester Institute of Technology. During my studies I interned with some utility companies and with Hewlett-Packard. My senior year project involved a team competition to build and race a “Moon Buggy” and I returned to the Space Academy grounds in Alabama for the race. I graduated in 2003 in the middle of a recession, with no engineering jobs available, so after spending a planned summer in Ireland I went back to school for a master’s program. I wanted to go back overseas so I chose a linguistics program at University College London. To date I have managed to never get a job as either an engineer or a linguist, but the skills I learned in those programs—problem solving, teamwork, critical thinking, communication—have been valuable in of all my pursuits, whether professional or personal.

What brought you to the University of Oregon?

My family had an opportunity to live anywhere in the country. After some narrowing-down processes we determined that Oregon was the right state for us, and as I was already working at a university I set about looking for ways to continue my university-environment employment. Of all the university locations in Oregon we liked Eugene the most so I began applying to UO positions to see what would happen next. I began at the UO in 2010 and so far it’s been working out!

How did you get involved in academic advising?

By the time I was finished with my own undergraduate degree I knew that I really loved the culture of a university environment. I was very grateful to the staff who helped me with my many questions as a student and I kept them and their kindness in mind as I developed my own career. After my master’s program was over I joined City University London as a staff member for their mechanical engineering program. Although not specifically an advising position, I was able to help the engineering students in unique ways due to my own experience as a mechanical engineering undergraduate.

When I moved back to the US I applied to work at the UO and started as the undergraduate coordinator in the sociology department. I began assisting the sociology faculty advisor and soon after she retired I became the department’s undergraduate advisor. When Tykeson Hall opened in 2019 I joined Tykeson’s Scientific Discovery and Sustainability Flight Path. I have been involved in academic advising at the University of Oregon since about 2011.

What’s the best advice you have for a college student?

Ask questions. Get involved. Introduce yourself. Try out a new club or event every term—no commitment promised, but just to see what it’s like. Challenge yourself regularly. Learn what it feels like to fail, and then learn what it feels like to recover. Ask for help when you need it. Be deliberately kind to others. Take a class in a subject that has always fascinated you, especially if it’s not in your major. Seek out instruction in personal finances, cooking, and laundry; teach others what you’ve learned. Try your best to make decisions that you can be proud of later. Be true to yourself and your identity—and use this time at college to explore what the many facets of your identity are and what they mean to you.

Email (emilner@uoregon.edu) is the best way and usually gets a quick response. I also use Microsoft Teams chat. This academic year I hope to be offering a mix of in-person and online advising appointments.